The Miracle League of CT Story

In 2003, Fairness in Youth Sports, Inc., a 501(c) 3 charitable corporation was organized with the philosophy that “Everybody Plays”. In doing so, the West Hartford Little League was formed with equal playing time for all at its core. To continue its mission, in 2005 a Little League Challenger Division team was formed to afford athletes who could not play in a traditional Little League setting the opportunity to play baseball in a meaningful way and to enjoy the proven therapeutic and socialization benefits of participating in team sports. The West Hartford Challenger team and others from surrounding towns played on traditional grass fields which allowed most athletes with developmental challenges, who could navigate the fields, the opportunity to play. Unfortunately, children with physical or more profound developmental challenges were unable to participate because of physical obstacles that traditional fields present.  Through this realization, The Miracle League of Connecticut was incorporated to create a barrier free environment to accommodate the needs of Connecticut’s young athletes, who require assistance, the opportunity to join their friends and experience the joy and triumph of team sports in their purest form.

Fundraising began in 2008, to build a Miracle League Field at the West Hartford Little League complex located at the corner of Trout Brook Drive and Asylum Avenue in West Hartford.  The Greater Hartford community came together to raise over $800,000 to construct the baseball field, an accessible to all playground and an accessible restroom and concession facility on the site.  Donations came from private, corporate, philanthropic and governmental entities.  Construction began in the fall of 2011 and the Grand Opening was celebrated in June of 2012.  The Miracle League Field in West Hartford was the first in New England and continues to be the only one in the state of Connecticut.

In addition to baseball activities, the Miracle League of CT sponsors the I Can Bike program in conjunction with the West Hartford Leisure Services Department that teaches children with special needs how to ride a two wheel bicycle over the course of a one week camp.  In 2015 we will be introducing Miracle League Adapted Swim Lessons in partnership with the Mandell JCC in West Hartford.  We also have held movie nights on the field, and a highlight each fall is our Trick or Treat Miracle League Style event that brings more than 40 local business, civic and family groups together on the field to create an accessible neighborhood for children with special needs in the area. 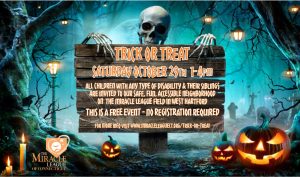